Made in Germany - Made by KAUP

Aschaffenburg, 18.06.2019 - KAUP GmbH & Co. KG (KAUP) was honoured with the corporate "Made in Germany" award by the german 'STERN' weekly magazine. This means the machine builder from Aschaffenburg now belongs to a total of 173 companies in Germany who are permitted to use this accolade. The award holders include well-known names such as 'Kahla Porzellan', 'Conditorei Coppenrath & Wiese' and 'Trigema'.

A further parallel: Many of the companies who have received the award are medium-sized, family-run companies like KAUP itself. "We believe in Germany as a location, and especially in Aschaffenburg" said KAUP CEO Holger Kaup, pleased at receiving the award. He continued: "This is the reason we are regularly investing in the Bavarian Lower Main - in machines, buildings and, especially, in people."

The "Made in Germany" corporate award is the second of its kind within six months. At the end of 2018 KAUP was honoured for its engagement as one of 'Germany's Top Traditional Companies' by 'Focus Money'.

About the seal of approval:

STERN Magazine, in cooperation with the Hamburg World Economy Institute as a scientific partner, hands out the "Made in Germany" award to companies located in Germany and who fulfil the following conditions: 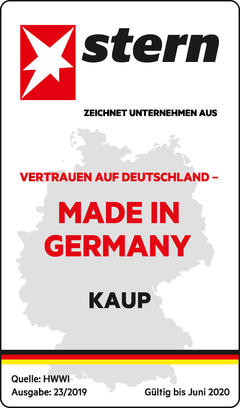 We use cookies to give you the best experience online and to provide anonymised, aggregated site usage data. You can find out what cookies we use, what they do and how you can disable them in our Privacy Policy. By closing this message, you consent to our use of cookies.

More than 50 years of experience.

KAUP as an employer